Can you win a Bert Harris claim if your property was not the subject of governmental regulatory action? 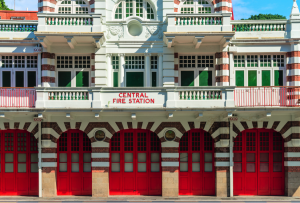 In 2005, the Smiths purchased a parcel of undeveloped riverfront property directly adjacent to a property that was owned by the City and limited with a deed restriction to the leisure and recreation of Duval County employees. Shortly after the Smiths purchased their property, the City got the deed restriction cancelled so they could build a fire station there. Over the next five years, the City rezoned its property and built a large fire station complex. The Smiths filed suit under the Bert J. Harris Act, Section 70.001, Florida Statutes, (aka the Private Property Rights Protection Act), which provides an alternative cause of action to a property owner whose existing use of, or vested rights in, real property are “inordinately burdened” by a regulation or governmental activity implementing the regulation. The Smiths alleged that the firehouse construction inordinately burdened their property because it made the property unmarketable as a luxury home and seriously diminished its value. The trial court ruled in support of the Smiths.

The 1st DCA, sitting en banc, reversed. Citing the plain language of the statute, the legislative intent, and an opinion of the Attorney General, the court found that a Bert Harris claim could be made only when the governmental action is directly ‘applied to the claimant’s property.” This means that other properties that are incidentally affected by the regulation are not protected by Bert Harris.

The court held that the trial court had taken the definition of “action of a governmental agency” out of context from the rest of the law. Looking to the legislative intent provision, as well as several other provisions in the law, the court held that it was clear the statute was not intended to “create a whole new class of plaintiffs.” In fact, many of the provisions would make no sense if a cause of action could be triggered by the effect of the regulation on a third party.

The court also looked to the history of the law and recognized that the focus of Bert Harris was “on the level of damage a party had to demonstrate in order to maintain an action based on the regulatory action of government.” It was created to provide another cause of action for property owners who, until then, could only sue for when a physical or complete taking had occurred. It was not, the court held, meant to apply to properties that were not the subject of a regulation, and certainly there was no intention to create a new class of plaintiffs who could sue for both regulatory and non-regulatory actions applied to other properties.

The court looked at case law and commentary since the Act took effect, and could find none that supported a cause of action for someone who didn’t have the regulation directly applied to their property. Rather, “the governmental entity must specifically apply the statute, rule, regulation, or ordinance to the owner’s property.”

Lastly, the court looked at the potential effects of a ruling that a Bert Harris claim may be made by a property owner where governmental action, regulatory or non-regulatory, was applied to another property. It recognized that “once the as-applied threshold is abandoned, any governmental action related to the use of property may engender litigation.” This could “open the floodgates for claims” against governments for the approval or construction of any government facility; regulatory changes affecting government facilities; and government approvals of private development. Such a position would significantly limit the ability of the government to act, as well as create additional taxpayer costs as the government dealt with the increased liability. Here, there was no legislative intent to create such a broad application of the statute, and “no such liability should be imposed without clear legislative language expressing such intent.”

Stay tuned for updates as the court has certified the question to the Florida Supreme Court as one of great importance. Given the Florida Legislature’s strong support of strong private property rights laws, this case may also be the subject of a bill in the future

By Leigh Fletcher | Published April 27, 2015 | Posted in Uncategorized | Comments Off on Can you win a Bert Harris claim if your property was not the subject of governmental regulatory action?