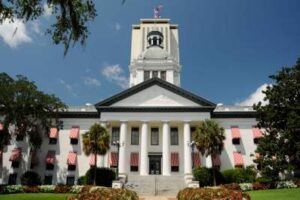 An important effort is creation of the Statewide Office of Resiliency. This bill (SB7016/HB1073)is supported by Governor DeSantis, and he has already appointed the State’s first Chief Resilience Officer, Dr. Julia Nesheiwat, who would lead the Office. The bill also creates a Statewide Sea-Level Rise Task Force. The Task Force would be made up of the Chief Resilience Officer, DEP’s Chief Science Officer (yes, that’s now a position in Florida too!), and recommended members from other major executive agencies and the legislature. The purpose would be to “develop scientific information” to make a recommendation and projections of the anticipated sea-level rise and flooding impacts along Florida’s coastline. These recommendations would be forwarded to the Environmental Regulation Commission, to review and accept or reject. If accepted, then the projections would be the state’s official estimate of sea level rise and coastal flooding impacts and “must be used for the purpose of developing future state projects, plans, and programs.” With the amount of money the State invests each year in infrastructure improvements, this law could provide one of the first opportunities to mandate the State to truly include resilience in its planning. Current projections show 1 to 3 feet of sea level rise in Florida over the next 30 to 40 years, and so it’s important that the state’s baseline projections be realistic and that the Governor and legislature avoid the many loopholes they could create to make swiss cheese out of this pretty positive bill.

Following on the approval of the Sea Level Task Force, another related bill (SB178/HB579) would prohibit state-financed constructors (a public entity that commissions or manages a construction project using funds appropriated from the state) from commencing construction of certain coastal structures without first completing a sea level impact projection (SLIP) study. The study has to be based on “a systematic, interdisciplinary, and scientifically accepted approach” and assess the flooding, inundation, and wave action damage risks to the coastal structure over its lifetime, the potential public safety and environmental impacts resulting from damage to the coastal structure, the risk and cost to constructing and maintaining the structure over its lifetime, the mitigation proposed to adapt to or reduce the risks, and the alternatives for the coastal structure’s design and siting. The bill has moved through several committees in the Senate, but as of this week hasn’t been heard in the House.

A bill seemingly attempting to go beyond studies and provide something of an actual effort to reduce carbon emissions is SB286/HB1069. It seeks to incentivize farmers to adopt and maintain land management best practices that reduce, sequester, and mitigate greenhouse gas emissions on land, by establishing a value for that carbon sequestration and creating a “carbon farming” tax credit that farmers can use. The Department of Environmental Protection is required to determine the amount of the credit which “must be based on the economic value of carbon farming.”

SB1232/HB913  takes an expansive look at how climate change is impacting our state. This would create the Florida Climate and Resiliency Research Program within the Department of Environmental Protection. The Program would assist “the state in understanding, assessing, predicting, and responding to the effects of climate change.” The participants would include a wide range of representatives from state agencies, regional resiliency initiatives, and non-profits. The Program would be required to prepare an assessment that analyzes, integrates, evaluates, and interprets the effects of climate change on a wide range of areas, including the natural environment, land and water resources, biological diversity, agriculture, energy production and use, economic growth, employment, financial risk, disaster preparedness, human health and welfare, and transportation within the state. The report would look at trends in climate change and recommend strategies to mitigate the effects found in the study and improve resiliency in the state.  A new report would have to be issued each year, and each version of the plan has to have a specific focus. The focus of the initial plan is required to be sea-level rise and coastal resiliency.

A few other bills have also been filed to address the impacts of climate change on broader aspects of our public health, safety and welfare. One bill (SB278; no companion House bill yet) would require the Department of Health to prepare an annual climate health planning report assessing the threat to human health which is posed by climate change.  Another bill (SB 280, no companion House bill yet) would require climate fiscal responsibility report be prepared, capturing the impact of climate change on the economy. These seem to have been somewhat subsumed by the broader plan of SB1232/HB913 to create the Florida Climate and Resiliency Research Program and may not end up going anywhere.

In 2017, Coral Gables passed an ordinance banning polystyrene (aka Styrofoam) from restaurants, supermarkets and other food establishments in the City. A lawsuit followed and the Court of Appeals struck down the ordinance as preempted by state law. A bill in this year’s legislature (SB182/HB6043) would remove the state’s preemptions relating to regulation of auxiliary containers, plastic bags and polystyrene. This would give back some home rule abilities to local governments to allow them to further regulate plastics within their boundaries. The bills have been referred to committees, but so far, no hearings have been held.

Another bill (SB1722/HB182) takes the opposite approach.  It would require another study (an update to the Department of Environmental Protection’s 2010 “Retail Bags” report), on the state of plastic bags and containers and whether there is a need for new regulation. In the meantime, it would prohibit local governments from enacting ordinances banning the use of these materials. As of this week, no House bill had been filed.

The legislature is also taking on Key West’s regulation banning sunscreens with chemicals harmful to coral reefs.  SB 172/HB113 would preempt local regulation of drugs and cosmetics (including sunscreen). This is moving quickly through both chambers of the Legislature. It raises similar home-rule issues brought up with last year’s proposal to preempt local regulation of straws. But will the Governor veto this one, like he vetoed the straw preemption bill? There is a bill by Senator Stewart (SB318) to do for the state what Key West did for the city: generally prohibit the sale, offer for sale, or distribution of sunscreen products with ingredients harmful to coral reefs. However, no companion House bill has been filed and given the speed at which the preemption bill is moving, it seems unlikely this will pass.