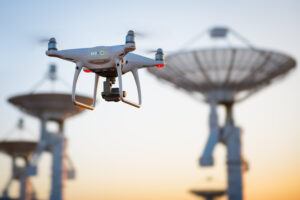 The U.S. Federal Aviation Administration is seeking comments on a proposed set of regulatory changes to the regulations governing unmanned aerial systems (drones) operation and production that would impact both maker spaces and amateur drone enthusiasts.

The proposed rules would be phased in over 36 months following adoption and would relate to both design requirements of UAS (drone systems) and the manner in which drones can be flown. If the rule is adopted, within three years all drones greater than .55 pounds flown in the United States must be either produced or retrofitted with the ability to continuously broadcast either a serial number or randomly generated numeric identifier over the internet to a privatized Automatic Remote ID USS connection system (rules for the privatized system operators are not published yet) – basically creating a virtual tower with which the drone pilot will communicate. The FAA anticipates the private network will be funded by subscription payments from drone operators, advertising or other non-governmental funds. The rules would not apply to amateur-constructed drones, but the only place a non-compliant amateur-constructed drone would be permitted to operate is within a “FAA recognized identification area” operated by a registered and approved community-based organization.

These regulations have a number of implications for maker spaces, educators and amateur drone enthusiasts.

For maker spaces, the definition of an amateur-constructed drone is so limited that if a maker space were to stock component parts for drone assembly for use by members, it is foreseeable that the maker space would be considered a manufacturer and would be obligated to certify that drones constructed in the maker space comply with the new remote identification requirements.

As noted in the proposed rulemaking:

Additionally, depending on the equipment and expertise of makerspace members, installing the required communication technology may not be practicable or economically feasible, and makers would therefore be precluded from building drones in the maker space. While there is a limited exception for drones built for education purposes, the limitations on use of non-compliant drones will likely limit the interest in building drones if there is no geographically proximate location to operate the student constructed drone.

The proposed rule provides that non-compliant drones (i.e. without remote id technology) will only allowed to take flight in specific areas. This has a number of implications.

First, hobbyists who currently own drones would have to retrofit them (if that is possible) or would be limited to flying them in registered FAA identification areas operated by community-based organizations.

“a membership-based association entity that-
(1) is described in section 501(c)(3) of the Internal Revenue Code of 1986;
(2) is exempt from tax under section 501(a) of the Internal Revenue Code of 1986;
(3) the mission of which is demonstrably the furtherance of model aviation;
(4) provides a comprehensive set of safety guidelines for all aspects of model aviation addressing the assembly and operation of model aircraft and that emphasize safe aeromodelling operations within the national airspace system and the protection and safety of individuals and property on the ground, and may provide a comprehensive set of safety rules and programming for the operation of unmanned aircraft that have the advanced flight capabilities enabling active, sustained, and controlled navigation of the aircraft beyond visual line of sight of the operator;
(5) provides programming and support for any local charter organizations, affiliates, or clubs; and
(6) provides assistance and support in the development and operation of locally designated model aircraft flying sites.”

The rules anticipate there being a one-time 12-month window for community-based organizations to apply for and be approved as FAA identification areas. The practical result of this limited window is that only established aeronautical or model aircraft clubs will be able to apply. This means hobbyists will be required to choose between paying membership dues to a club or paying to retrofit or replace a drone. If there is no existing club near the geographic location of a hobbyist, then a hobbyist (or an educator seeking to build and fly drones as part of a class) would be required to travel to find a permissible location to fly the drone. This would likely severely limit the ability of users in rural areas and low income communities to learn about and experience UAS technology.
The reasoning behind the FAA proposed rule is that increased drone usage is threatening safety and security of general aviation aircraft, and is hampering police and military operations. The FAA also suggests that these types of regulations will be required before operation of drones out of line-of-sight of operation is permitted. However, it seems that the FAA is inadvertently restricting the potential for innovation and educational uses by disproportionately restricting activities in maker spaces and schools, and increasing costs to hobbyists and educators. A more balanced solution might be to approve a FAA identification area in at least one public park or school per city and county, and to fund management of those facilities as part of the public flight safety infrastructure.
The FAA has requested all comments on the proposed rules be delivered by March 2.
Send comments identified by docket number FAA-2019-1100 using any of the following methods: