The Farmer in the Dell: Challenges of Urban Agriculture 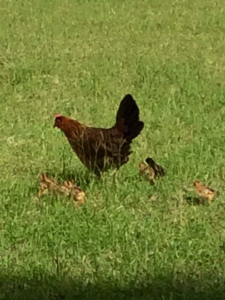 In St. Croix, we have chickens, a lot of chickens. We have so many chickens that outdoor cafes place water squirt bottles labeled “Chicken Be Gone” on tables so you can defend your meal. Wild chickens nest everywhere, producing more chickens on a regular basis – chickens downtown in historic buildings, chickens in parks, chickens by the back door of our laboratory, chickens roosting on the car, well you get the idea…we have chickens, and they are kind of a nuisance.

Which is why it strikes me as funny that the right to raise chickens is being debated in cities across the United States. Urban America used to have chickens – people kept coops behind their homes to provide fresh eggs; sometime during the early twentieth century that changed. Since then, chickens have been, for the most part, relegated to farms. Urban backyards have become the domain of domestic house pets, playsets and blow up pools. I have read articles that suggest that anti-chicken keeping laws developed over time in connection with subtle separation of social classes – since working class families used chicken eggs for food and sold them as a commodity, outlawing the keeping of chickens effectively zoned that economic class out of the city limits. Legislating chickens, the theory goes, achieved social separation indirectly, something zoning laws could not be constitutionally used to do. That may or may not be why it happened, but until recently, chickens and other farm animals were persona (or maybe animalia?) non grata in most cities.

Fast forward to today, and times have changed. Raising chickens is hip; as part of a burgeoning urban agriculture movement, people are organizing around efforts to legalize the keeping of chickens, goats and even bees in the city limits of municipalities large and small across the U.S. The American Bar Association has published a book on the urban agriculture phenomenon, complete with recommended models for urban farming ordinances. The ordinances held up as models typically legislate the number of chickens, goats or bee hives permitted on a lot, define setbacks and licensing requirements – striking a balance between public health, nuisance and the freedom to raise your own food.

In Tampa for example, the farm animal regulations state:

(1)It is unlawful for any person to keep, harbor or maintain any farm animal, except under the following conditions:

a.Animals must be kept within an enclosed area which is a minimum of two hundred (200) feet from any dwelling on an adjoining parcel of land in separate ownership.

b.Land requirements per animal shall be as follows:

Above land requirements are the gross area of premises harboring such animals and include areas used by the resident for residential or other purposes, in addition to the keeping of animals.

Chickens as an accessory use shall adhere to the following requirements:

These regulations were most recently amended in 2013, and while I have found no census data on the number of farm animals kept in the Tampa city limits, I personally know five families that keep chickens and two that keep goats, so I think the practice must be fairly widespread.

From my St Croix perspective, with Crucian chickens laying eggs in my driveway without regulation, a well regulated chicken population in Tampa is reassuring – but it is also reassuring to know there are food sources close by.

The realities of the industrial food system mandate looking at other options. Despite regulation by state and federal agriculture officials, for a vegetable to reach the average American home, it is handled sixteen times between harvest and delivery. Lots of opportunity for contamination, and food is often harvested prior to peek ripeness to allow for the delivery process to take place over a week or more. Add to that the fact that most urban areas at any given time only have enough food to feed the population for three to five days in the event of a disruptive natural or terrorist disaster, and it almost seems prudent to at least plant some tomatoes.

So lead on urban farmers! (but please, keep your chickens under control).

Leigh Kellett Fletcher has been practicing land use, environmental and real estate law since 1997 and regularly represents clients acquiring, developing and selling real estate in Florida and the U. S. Virgin Islands. She has been involved in the purchase, sale and redevelopment of multi-family residential projects, office, commercial and mixed use properties and has worked with clients to obtain land use entitlements and environmental permits to develop and expand commercial development.

By Leigh Fletcher | Published November 23, 2015 | Posted in Uncategorized | Comments Off on The Farmer in the Dell: Challenges of Urban Agriculture