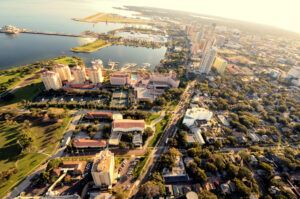 Yesterday, attorney Anne Pollack spoke with Chris Steinocher of the St. Petersburg Chamber of Commerce and Joe Hamilton of the St. Pete Catalyst on their “Coronavirus Impact Insights” podcast about the proposed changes to development regulations for St. Petersburg’s much expanded Coastal High Hazard area.  The conversation can be found here.

In St. Pete and around the country we are dealing with issues of affordable housing and the need for jobs, especially after the devastation of the coronavirus pandemic.  But those issues of place and space also mean we have to proactively deal with the effects of climate change – including increasingly dangerous and damaging hurricanes, and more regularly, increased sea level rise and coastal flooding.

The issues of sustainability and resiliency – both in terms of the environment and with our economy – are issues Anne and the Firm have been focusing on, both in the law practice and through Anne’s role as Chair of the Public Policy Council of the St. Petersburg Chamber of Commerce, and in her role last year as Chair of the Chamber’s Sustainability Committee.

The Coastal High Hazard area (CHHA) is defined generally as the area most likely to be significantly damaged by wave action from storm surge. This is changed periodically thanks to better data, technology, and changes over time to land itself, and in 2016 FEMA once again updated the flood maps and the boundaries of that defined CHHA.  This time, however it was a big change. It went from covering about 22% of St. Pete, to covering a whopping 41%.

The issue in St. Pete is that the City’s Comprehensive Plan doesn’t allow increased density in the CHHA. There’s no wiggle room on this.  In the past, it didn’t matter as much, because much of the land was public land or single family.  But now, the expansion means that the CHHA includes areas that the City had targeted well before this change, for economic development, job growth and redevelopment, as well as affordable housing.  These areas include:

We’re no longer just talking about the lands closest to our coasts, and limiting development there could have a potentially deleterious effect on economic development and affordable housing construction in those areas.

The City is now working on efforts to amend the Comprehensive Plan to allow increased density (on a case by case basis), while changing the Code to require that the buildings that are allowed are constructed to be more resilient to storm surge, flooding and wind, that mitigation for service and infrastructure needs created by storm events is provided, and that planning for evacuation before the storm and reentry after the storm is included as part of the development plans.  The stronger design standards would apply to all new residential multi-family development with the CHHA, even those that don’t require a comprehensive plan amendment to increase density. This is a big step towards enforcing increased resiliency to protect our residents and businesses.

People keep moving to St. Pete, and if the expanded area of the CHHA can’t be redeveloped, there could be some major issues going forward given the limited area left to redevelop:

Anne’s discussion on this can be found here.