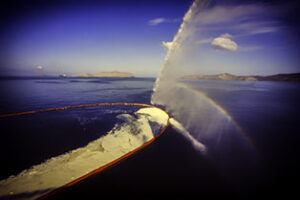 At the Caribbean Regional Response Team Meeting on January 27, 2020, the EPA reported on the draft Best Management Practices that will guide federal response activities to future oil spills using dispersants and solidifiers in Puerto Rico and the U.S. Virgin Islands. The BMPS were developed as part of the formal Section 7 consultation with U.S. Fish and Wildlife and National Marine Fisheries under the Endangered Species Act for programmatic approval of dispersant use.

The BMPs incorporate lessons learned in the Gulf of Mexico during the Deepwater Horizon Spill Response, and best available science on environmental resources in the Caribbean, including the West Indian Manatee, endangered coral, and essential fish habitat including coral reefs, mangroves and seagrasses.

The BMPs will be included as an appendix to the Regional Response Plan so that they can be updated as scientific information and technology improves. One recognized weakness is that NOAA’s Environmental Sensitivity Index Maps need updating and therefore identifying where environmental resources are during a response may have to rely on real-time surveys of resources as response is being formulated.

It is anticipated that during an actual response NMFS and USFWS will be consulted for site specific guidance and that information will incorporate detailed information on resources in the affected area.