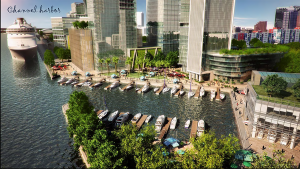 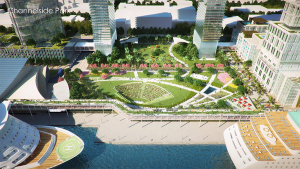 This morning Port Tampa Bay presented its vision for the 45 acres the Port owns bordering the Channelside district in downtown Tampa to members of the Tampa Downtown Partnership.  The land is currently home to the cruise terminals, the Aquarium parking lot and vacant industrial land.  Ram Kancharla, Vice President of Planning and Development for Port Tampa Bay, outlined a vision that includes more than 9 million square feet of mixed-use space, a park and increased public access to the waterfront.

The plan includes consolidating and rebuilding the cruise terminal and creating a multi-purpose cruise terminal and marketplace, developing multiple high rise towers, repurposing water front to include a small scale marina, connecting the street grid to existing downtown Tampa, re-designing a portion of Channelside Drive to increase pedestrian access, and creating a seven acre park and a multi-level linear park along the waterfront that will be open to the public.  The public investment is estimated to be approximately $250 million, the majority of which will be spent by the Port on the cruise terminal modifications.  Other public funds may come from CRA tax increment revenues. The value of the private investment envisioned for the area is approximately $1.5 billion.  The plan divides the land into multiple smaller districts and outlines a development timeline that Kancharla acknowledged will be driven by the private sector demand.

The Port has been working with Strategic Property Partners’ (Jeff Vinik’s group) to make sure the vision complements the vision for the neighborhood surrounding the Amalie Arena, which is proposed to include a downtown home for the USF medical school and an office high rise designed to house corporate headquarters.

The details in the vision presented by the Port seem aspirational for Tampa, but as one attendee noted, if even one-third of what is proposed gets built, the impact on downtown will be immense.  Likewise if Vinik’s plans come to fruition, the two proposed riverfront office and residential towers are completed, and the plans for expanding downtown into the North Boulevard area become a reality, downtown Tampa will more than double its residential units, vastly increase its office space and will have reclaimed public access to much of the waterfront along the Hillsborough River and the bay.
Additional renderings of the proposed vision can be found at : www.ptbchanneldistrictvision.com

Leigh Kellett Fletcher has been practicing land use, environmental and real estate law since 1997 and regularly represents clients acquiring, developing and selling real estate in Florida and the U. S. Virgin Islands. She has been involved in the purchase, sale and redevelopment of multi-family residential projects, office, commercial and mixed use properties and has worked with clients to obtain land use entitlements and environmental permits to develop and expand commercial development.